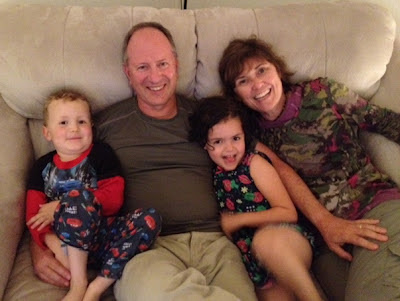 Here's one final post from Grammy and Grandpa's visit - just some random pictures of us enjoying our time together.

Here's just a quick post on the trip I took to Germany's oldest city (2000th anniversary in 1984 apparently) with Don and Connie when Pete was at work and the kids were at school.

(I must admit I'm not blogging out of inspiration - I'm battling a monster cold immediately following my recovery from a sinister stomach virus, and thus cannot sleep.  The kids have already brought home some nasty germs from school - germs that their classmates gathered up on their holidays to various parts of the world and which are all now mixing and spreading through the magic of the school system.  As I've mentioned, the population here is nearly half immigrants and expats, and the vast majority travel home and elsewhere in August.  And since we are new arrivals with underdeveloped immunity to European bugs, and also gradually tapering off the adrenaline-boosted hyper-immunity of an international move, we are prime hosts for transmission.  Joy.) 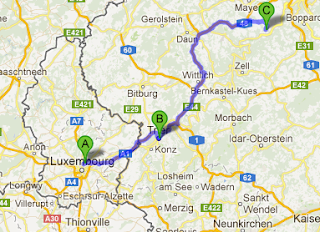 As you can see above, Trier is Point B,  It takes about 40 minutes to drive from our place (and I think I could get a cheap bus or train in under an hour).  Point C is Burg Eltz from my last post, about 2 hours from home.)

And just to put it in perspective...
We were only in Trier for a couple of hours before we had to get back, so we just looked at few things.

And moving on through the town...
And here's inside the smaller church next door...
We continued to the Basilica of Constantine - used to be part of the Roman palace, now used by the Protestant church.

There was more to explore but that was all we had time for this visit.   I'd like to go back later this fall to admire all the autumn colors along the Moselle River on the drive in.  I know, I'll take the bus!

Posted by Pete and Rosie at 8:07 AM No comments: 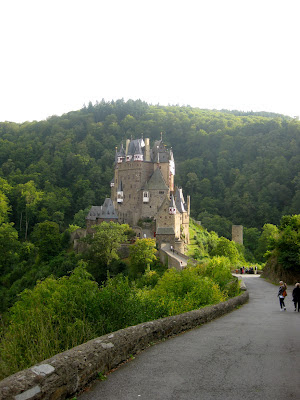 Don and Connie wanted to take us to Eltz Castle while they were here, which is apparently Rick Steves' "favorite castle."  I don't follow/watch/read Rick Steves - I have nothing against the guy, I just haven't really had occasion to.  But that day I went to his Facebook page, and sure enough, Burg Eltz was featured as his cover photo, freshly updated with a picture from when he must have visited recently.

(Suddenly I felt all cool and well-traveled and such.  Thanks, Don, Connie and Rick!)

I posted my own not-as-good pictures on Facebook already, just to mix things up a bit, but I thought I should post a few here too for blog continuity-sake.  (No photography allowed inside the castle, unfortunately.)

I don't do a very job describing historical sites.  I'd rather just direct you to almighty Wikipedia.  Or suggest you consult my new pal Rick Steves.

While the kids were in school we took Pete's folks on a walk down through the Petrusse Valley... 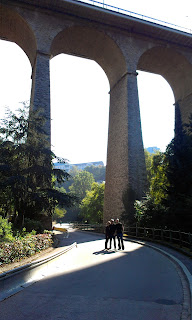 and into the Grund down by the Amazon offices... 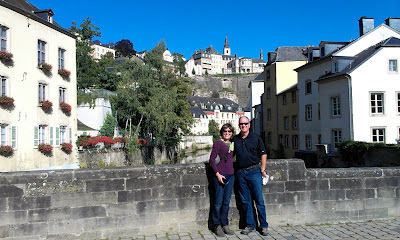 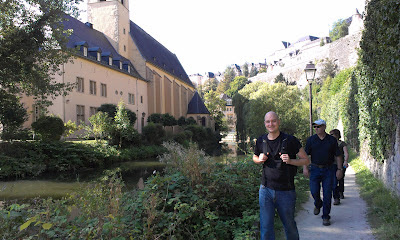 As you are walking through the valley and look up toward the city center, you see the Bock - what's left of the fortified promontory that surrounded the old city.

Part of this promontory is called the Bock Casemates.  The casemates are the remains of underground passages that were used for military defense purposes in previous centuries.
When we wound our way back to the top of the city, we found ourselves at the entrance to the Casemates, so we decided to go in and look around (about 3 Euros each).  Apparently it is the most popular tourist attraction in Luxembourg, so why not?

It was pretty cool and definitely worth doing just for the unique experience (as long as you're not claustrophobic).  I'd say it's somewhat kid-friendly if you avoid the staircases.  You can read more about the casemates here.

Posted by Pete and Rosie at 1:07 AM No comments:

Week One of School Wrap-up

Grammy and Grandpa left on Thursday, and I thought I'd just jot down some events and observations from the first week of school while they're fresh in my mind, before going on to post more about their time here.  Maybe this is too much detail, but I figure it could actually be useful information about Luxembourgish school to someone. Someday. Maybe.  More likely I will get a call from the Luxembourgish government telling me to quit it.

Daycare before school, after school, and lunchtime is called foyer scolaire (home school).  As I mentioned, James and Daphne stay for lunch daycare M-W-F (and come home for the day at 12:30pm on T-TH).  At lunchtime, all the kids that stay are split up into smaller groups, somewhat by age.  There are two foyer teachers that I worked with at the end of last year to get the kids registered - great ladies.  James is in one of these teacher's lunchtime groups, and Daphne's in the other's, so I was really excited about that.

What do they eat?  This week they had spaghetti, salmon, and tacos, respectively.  It sounds like they eat salad at every meal and sometimes an additional vegetable.  So far I haven't heard any complaints.

James' foyer teacher seems amazed by how mellow and quiet he is, and also how ssllloowwwllly he eats (yep, we know).  Daphne's teacher, on the other hand, commented on how MUCH Daphne eats (yep again).  I guess the first day of school she finished all her food and asked for a second helping, but she had to be held off until the teachers and servers got a chance to eat!  The teacher also says she has no fear and asks all kinds of questions.  She was clearly shocked, maybe pleasantly surprised, by all of this.  Anyway, I just wanted you all to know that Daphne successfully solidified the stereotype of friendly, over-eating American in our little corner of Europe from her first day.

James class actually has 3-5 year olds, since they didn't have enough kids to make a full "précoce" this year (the first year of optional preschool when kids are 3).  The minute James walks into the class each day, he basically clamps his mouth shut, and as far as we can tell it stays that way for the full 4 or 8 hours.

He says he does talk to his friends a little (a handful of the kids in his class know some very basic English).  We're fairly confident that several months down the road he will suddenly start rattling off fluent Luxembourgish to the teachers.  That's just the way this kid rolls.

There's not much else to report about James since it is quite similar to last year.  Except that some kind of stomach virus has already been around the school, and James had it one night this week! (*update: and I got it next!  I've since heard from a couple reliable sources that stomach bugs are frequent guests at Luxembourg schools.  Yikes!)

Daphne's class:
Primary schools here are set up quite differently from the US.  There isn't really a principal, just one of the teachers who is sort of the "head teacher."  Thus, there's no front office, no secretary, just halls and classrooms.  If your child is absent you call his/her teacher directly.

Because there is one school per neighborhood, there is just one class for each of the grades, occasionally two.  There are 20 kids in Daphne's class, which may seem small, but it's important to remember that everyone is learning German and this is a foreign language to probably the majority of the students.  Who knows how many other "mother tongues" are represented; I know at least four and it's probably more. There is at least one girl in the class who only speaks French.  It sounds like the teacher has been translating some of the Luxembourgish instruction for her and Daphne, and maybe for some of the other kids as well.

Even though I saw swimming on the class schedule, I doubted it would actually happen the first week.  Still, I sent the required bag containing swim suit, swim cap, towel, and shampoo on Friday.  And sure enough, Daphne's class was bused to a swimming pool on Friday.  I can't really imagine 20 kids in a swimming class at once, but apparently there are a couple other adults at the pool who stand on the side and "hand out noodles and tell us how to swim."

The swim teacher is also the gym teacher.  The kids bring a gym bag with shoes and gym clothes every Thursday.  The only time Daphne came out of school upset (crying) this week was when the gym teacher had just yelled at her to hurry up getting her clothes back on (she says she was distracted in the locker room by some other kids "doing karate.")

In addition to her "home room" teacher and gym/swim teacher, she also has separate teachers for German and Religious Studies.  (We had the choice of Religious Studies or Moral Studies, and we decided to have her try Religious Studies this year to see what it's like).  She may have other teachers but that's all so far.
Socially, things seem okay so far.  On the second day she mentioned that some older girls at recess were pushing her in the back or knocking her on the head with their fists and then hiding behind a tree.  It sounded irritating but mostly playful, and apparently it's died down a bit.  She told me that things are already going better friendship-wise than last year, and that the kids seem more accepting and inclusive.

Even though the language of instruction is over her head, the actual content (writing numbers and letters, learning letter sounds and basic words, etc) are solidly in her wheelhouse.  She is happy to be "learning" instead of playing.  So for now, the academics are under control.  We know that can change quickly; I have a feeling they will progress though the material quite rapidly.  And after all, it's only week one!

Daphne will be learning to read and write in German this year.  Today she brought home her first textbook.

I just thought it was a lovely and engaging little book and thought I'd share a few pages here.