James in "Küss den Frosch" (The Princess & The Frog)

(Moving updates to come - we leave next week! - but meanwhile...) 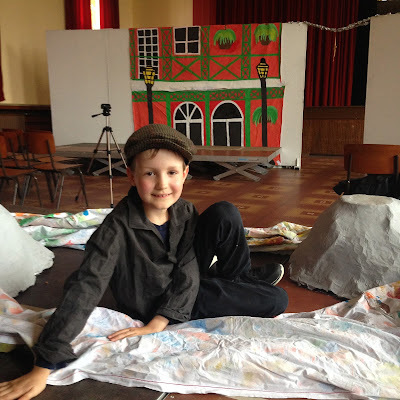 James had the good fortune to participate three plays in three different languages during our four years in Luxembourg.

His first role was Simba in his 1st grade class' production of "The Lion King" in Luxembourgish. Then this past spring, he and Daphne were in the young chorus of a English community theatre production of "Oliver!" And then this week, his 2nd grade class put on "The Princess & The Frog" in German. His amazing teacher adapted the 2009 Disney movie's screenplay set in 1920s New Orleans. James was the Narrator, and also the wedding officiant/MC.

As the narrator, James had his own mini stage in the middle of the auditorium, where he awakes at the beginning of the play to set the scene:


Then he pops up every once in awhile to give shorter transitions, and eventually makes his way to the stage to officiate the cut-short wedding, and then back to his post to officiate the real wedding.

Then after his closing monologue, James introduced the cast:

So a big thank you to Luxembourg for introducing this little guy to theatre!

Posted by Pete and Rosie at 1:14 PM No comments: