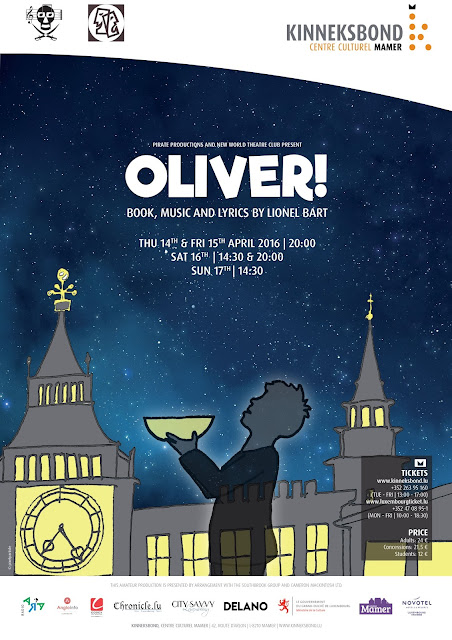 Two English-speaking theatre clubs in Luxembourg recently collaborated on a grand production of "Oliver!"-- the musical based on Dickens' classic novel, Oliver Twist. James and Daphne were cast as workhouse orphans, as well as members of Fagin's gang of pick-pockets.

The long road to the 5-performance-run of April 2016 began way back in June of last year, with a casting call in the English version of the local newspaper for kids ages 8-18. James had just made his theatrical debut as Simba in his class production of The Lion King, so acting was fresh in the minds of the kids when I suggested Daphne audition. She had mentioned several times that she would enjoy being in a play, even before James stared in one. She prepared a song for the audition, but James was only 7 and too young to participate. However, a friend pointed out that the children only had to be 8 by the time of the actual show, a detail I'd overlooked. So at the last minute James threw in his lot with one of the only English songs he can perform on the spot, "Twinkle Twinkle Little Star."

We had no idea what to expect at the casting call, having never done this before, but also because it's a foreign country and "not knowing what to expect" is a way of life. The kids were ushered one by one to another room to sing for the music director, while the main group were taken through some warm-up exercises. Next, the kids paired off with a few lines of basic dialogue to prepare and perform, first in their normal voices and then with an assigned emotion (James had "afraid" and Daphne had "rude"). And they did a pretty nice job if I do say so myself!

But then came the dancing bit, where they had to learn and execute a bit of choreography, complete with paper plates as top hats. The directors took video of the final product to examine later. Dancing is not our family's strong suit, so that didn't go so well. We told our two not to get their hopes up.

But lo and behold, we found out a few weeks later that they made the chorus. Rehearsals would begin in the fall of 2015, every Saturday afternoon and some weeknights, until the performances the following spring (7 months in all). Slightly intimidated by the prospect of such an intense commitment, but comforted by the fact that they would at least have each other, they accepted the roles.

And it was indeed a serious business; 40 kids and teens, 40 adults, a 50-member production team, a 26-member orchestra, costumes and sets shipped from the UK, make-up tutorials, practicing music at home, parent volunteer duties, hunting down the proper shoes, costume fittings, up-till-midnight rehearsals on school nights in the weeks leading up to the show....a massive undertaking by all involved.

We wondered how the kids would handle it, and at times they did appear to be growing tired of it all.  But as the date of the performances approached, their excitement built, and the more intense things became, the more they actually seemed to enjoy it. Additionally, the bonds between the young chorus members grew as they spent so much down-time together between their scenes, so they all looked forward to rehearsals with their new friends.

Thankfully, the show was a great success, with five sold-out performances from Thursday through Sunday. Unfortunately, Daphne became ill on Friday morning and had to miss the evening's performance. She took the disappointment quite well (far better than I did!) and was able to return for the last three performances.
The director cast two kids each for the staring roles of Oliver and The Artful Dodger (illness insurance), so Pete and I went to the show twice to see both combinations. I didn't take any photos during the show; we were sitting down front and I didn't want to be a distraction to those behind us. I did take some backstage the night I helped with kid make-up and corralling. Fortunately, photos appeared in local online newspapers, and a friend of the cast took some as well. Most are pretty far away with the kids the background, so you may want to click on them to enlarge.

Here are a few more of the orphans:
And a couple more backstage...

We were very proud of our kids for all their hard work, and of Luxembourg itself for pulling this off in a country where English is not one of the official languages. Apparently over 25 nationalities were represented in the production. I'm sure the kids will have vivid memories of this experience when they look back on their time in Luxembourg many years from now.
Posted by Pete and Rosie at 9:48 AM No comments: